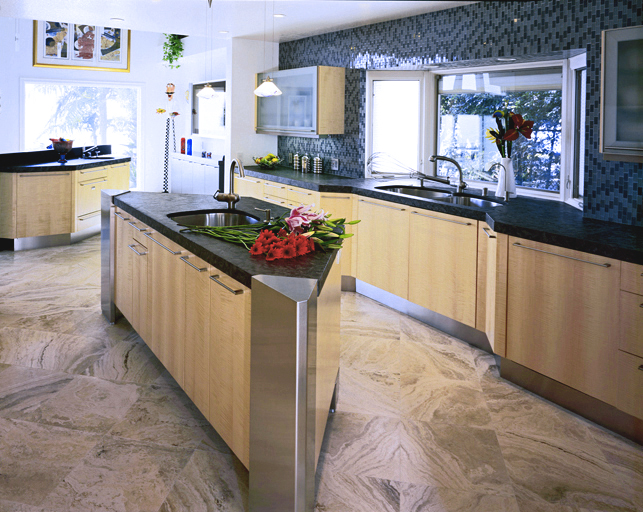 “Why should a kitchen be simply functional?”

This was our client’s first question and the starting point for this one of a kind kitchen remodel. Each design component was scrutinized and chosen for both its unique individual character and its ability to serve as a striking backdrop for the client’s diverse collection of contemporary folk art.

Below are the Before and After photos showing the dramatic transformation: BEFORE: The original kitchen was small and dark. This photo shows the peninsula wall with upper cabinets that was blocking the view between the kitchen and breakfast area.

AFTER: Zieba Builders opened up and reconfigured the space by removing the peninsula and its upper cabinets. This entailed the redistribution of a structural load from the second level to a new recessed beam.

Strong elements of brushed stainless steel and monochromatic glass mosaics offer a sharp counterpoint to the warmth of the new cabinetry. “Matrix” granite countertops have been given a sandblasted finish, revealing a subtle but striking texture rarely seen elsewhere. The two kitchen islands are designed to do double-time as additional works of art in the home of this avid collector. BEFORE: The existing cooktop was awkwardly placed on the island directly across the narrow passageway from the sink. This made it impossible for more than one person to work in the kitchen at a time. AFTER: The sink base was moved into the niche formed by the bay window, and the cooktop was moved from the island to the back wall of the kitchen where a bank of storage cabinets once stood. Two new islands were constructed with additional prep sinks in each. AFTER: Cantilevered and recessed art niches were created to house several of the owner’s collectibles.

Zieba Builders has the experience, expertise, and passion to make your next home project a success. Ready to get started on your design & build project? Give us a call or email us today!